Learn how fake bills look like to protect your business from counterfeit money.

Don’t have your business, yet? Start with ZenBusiness. We are experts in business formations. 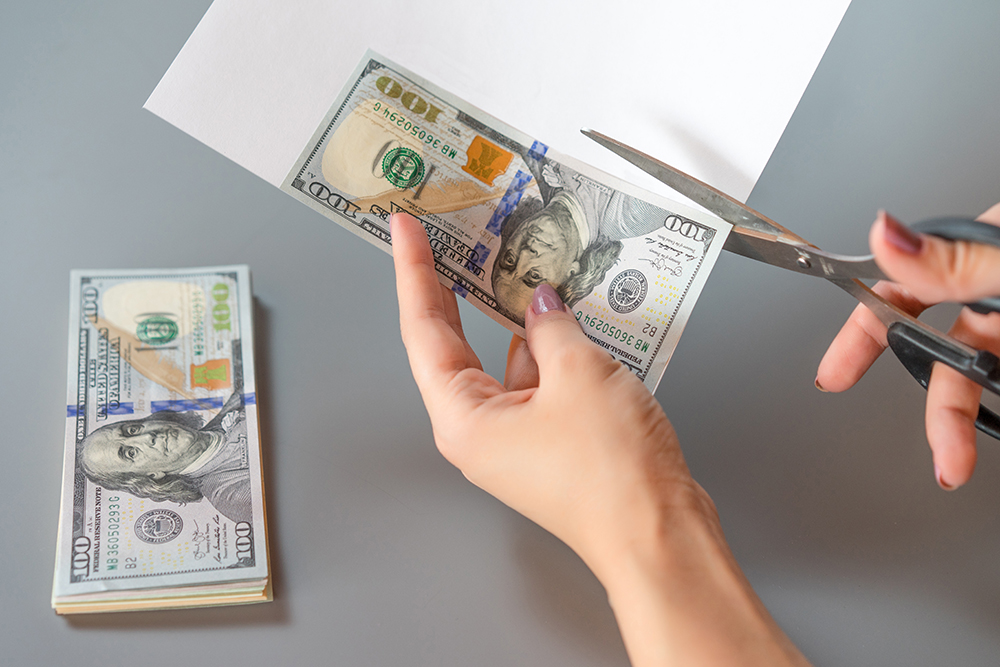 When retailers accept fake bills, they bear the entire burden of the loss. Although counterfeiters’ techniques are improving, the bad bills can be detected. Here’s how to spot counterfeit money and protect your business from related losses.

Counterfeit money is an ongoing threat retailers can’t afford to be complacent about. During the first three months of 2021, U.S. Customs and Border Protection officers seized $1.6 million in counterfeit currency in Chicago, Illinois. Another $110,000 in fake currency was seized in California.

Unfortunately for businesses, not all counterfeit bills are found and seized before getting into distribution. And when a business accepts fake money in payment for merchandise or services, they lose the face value of the money they received plus any goods or services they provided to the customer who paid with the counterfeit $20, $50, or $100 bill.

In one case, the Connecticut Better Business Bureau (BBB) was alerted to a $100 counterfeit bill that had been passed to an unidentified retailer in Southeastern Connecticut. According to the Connecticut BBB, the phony bill began as a legitimate $5 banknote.

“The counterfeiters apparently used a technique that involves bleaching legitimate money and altering the bills to look like $100 notes,” the BBB stated in an announcement. “Many businesses use special pens to detect counterfeit currency; however, the pens cannot give a definitive confirmation about suspected altered currency, and they are not sanctioned by the U.S. Treasury.”

Large bills like $100 and $50 bills aren’t the only ones that are counterfeited, either. In December, 2019, U.S. officials seized close to $1 million in counterfeited one dollar bills.

How to Spot Counterfeit Money

Business owners can train their employees to examine all bills they receive, $10 and higher. If they believe they are being given counterfeit money, they can call the police.

Small business owners need to be aware of the many ways to detect counterfeit money. The Secret Service offers a downloadable PDF called Know Your Money that points out key features to look at to determine if a bill is real or fake. The Secret Service and U.S. Treasury also offer these suggestions:

Know what to do if you suspect fake bills

If you believe you have received counterfeit money,  the U.S. Treasury advises you to do the following:

Remember, if you are passed a counterfeit bill, you own it. So when accepting cash, it pays to be knowledgeable about the crime of counterfeiting.

Disclaimer: The content on this page is for informational purposes only, and does not constitute legal, tax, or accounting advice. If you have specific questions about any of these topics, seek the counsel of a licensed professional.

RELATED: Protect Yourself and Your Business From Identity Theft

Start an LLC in Your State

When it comes to compliance, costs, and other factors, these are popular states for forming an LLC.

About the Author: Paul Davis is a writer who covers crime & security for newspapers, magazines and the Internet. He can be reached at pauldavisoncrime@aol.com Paul Davis on Crime & Security

10 Quick Tips To Balance Your Time And Energy More Effectively

How Your Facial Expressions Affect Your Business Relationships

When And How To Raise Your Prices

How to Make it Easier to Apologize

Made with 🌮 remotely by ZenBusiness INC © 2022. All Rights Reserved.